Do Markets Still Have a Way to Go to Complete the Current Correction?

Stock markets have been “ranging” a bit over the past few weeks, as if a pause were a necessary event before investors evaluated the latest round of economic data.  During these market pauses, it is often best to step back and see if any long-term trends are playing themselves out from a different perspective.  Traders typically look for fundamental guidance before developing their various strategies, but there are times when technical information may provide insights for near term guesstimates.

Global trends have been favoring the developing economies, especially those in Asia, but correlations of many global exchanges are still tied to our domestic stock market performance.  For this reason alone, any new direction for equities will most likely be driven by what happens with the S&P 500 Index.  The following chart provides a basis for this discussion: 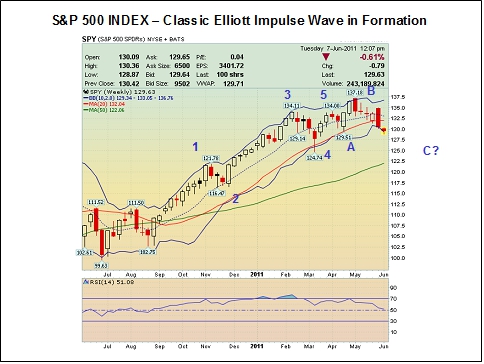 Disclaimer: Past performance is not indicative of future results.

If we step back and review a weekly chart for the “SPY” ETF, a good facsimile for the popular market index, the formation of a classic Elliott impulse wave appears to suggest that the recent downturn may have a way to go before finding resistance, the area noted by the last leg of the wave as “C?”.  As additional confirmation, the Relative Strength Index (“RSI”) is in mid-ground territory between overbought and oversold conditions.

It might be a bit of a stretch, but one can also see a shoulder and head at this stage.  If we extend the chart to the right and form the second shoulder, the predictable drop from that point, the “neckline”, might go much further down to the “117” level.  As dismal as these technical readings may be, they are also supported by fundamentals.

The dreadful phrase of a “double-dip” recession has been resurrected over the past few days.  Analysts, especially the ones on financial news channels, were quick to suggest this possibility after the poor labor report that was released this past Friday.  The Fed was banking on its quantitative easing program to provide the latest stimulus, but trying to jumpstart the domestic hiring engine has once again proven to be more difficult than most anyone expected.

Gridlock on Congressional Hill has not helped, and with Moody’s threatening a downgrade on our national debt has not broken the apparent logjam. In the meantime, most investors are checking with their favorite financial websites for guidance for near-term advice.  The summer months have typically meant vacation time for institutional traders, lower trading volumes, and a general slowdown in all market activity.  This recent downturn may be representative of this “seasonal” condition and nothing more.

The larger question, however, is when will Western economies generate stable growth in their domestic markets.  While corporate executives espouse resource allocations to thriving Asian markets, domestic growth is necessary to create jobs, raise disposable income and hopefully our real estate market, and produce an increase in taxes to pay down our national debt.  The United States and Europe are in the same boat.  Developing economies have prospered due to exports to the West, but our futures may depend on reversing that export formula.

Will the American consumer accept having to pay higher prices at Walmart and Target?  Correcting import tariff inequities is paramount to fixing current trade imbalances.  The Dollar has weakened enormously, due in part to the Fed’s QE2 expansion of the money supply, but a rebound will surely happen as GDP growth resumes.  The currency advantage is a short-term event.  Long-term fixes are needed now.

For the near-term, further corrections may be in order, but the long-term direction of the market is anyone’s guess.