The ADX indicator is a very useful indicator for determining strength of trend. ADX is based on a moving average of  price range expansion(The most common setting is 14 days).

I am not a big fan of using lots of chart indicators but ADX(also called “Average Directional Index”) can be useful. Lets quickly about what it is and how it can be useful.

ADX is plotted as a single line with values ranging from a low of zero to a high of 100. It is important to understand that ADX is non-directional; it registers trend strength whether price is trending up or down.

DMI crossovers can be HORRIBLE indicators and can just create a lot of indecision in your trading.

In other words a low reading of ADX means the trend is weak and be choppy trading. As ADX moves above 25 then it can signify a trend is starting and is a good level to watch. As ADX moves above 30 then is showing strong trending and generally most stocks don’t move much above 40 unless they have a lot of momentum.

How I Use ADX

Remember, that ADX indicator measures strength of trend and range expansion or contraction. It does not indicate up/down trend but just strength of range and signals a potential breakout of range coming.

For swing trading or trend trading ADX is useful as a scanning filter to stick to stocks that are trending and seeing a rising ADX reading. It is not very useful to watch the rising or falling movement of the ADX line as it is not intended as a timing tool.

If you trade options I like to use ADX indicator for indexes especially when doing neutral/range strategies like an Iron Condor. If you see the ADX line moving up and indicating it could be moving into a trend then be careful with Iron Condor. Indexes tend to correlate their moves better with ADX than individual stocks as stocks can have much longer momentum moves vs. indexes that tend to revert to the mean more often.

Overall, high readings like 35-40 means a trend could be coming to an end  and low reading of ADX like 10-15(in teens) means you are in a trading range and to watch for a potential breakout of that range with increased ADX readings from those low levels.

First chart is the SPY(S&P 500 ETF) and second chart is Google. You can see on the SPY chart that when ADX get above 30 then the index starts to level out and change direction whether that is up or down.You can see though that uptrends can last longer than the ADX readings leveling out so it is a bad timing indicator but VERY useful if you are looking to do something like neutral strategies like the Iron Condor I mentioned above.

Also, you can see when the ADX reading was very low in January 2012 after being in a range for months, that it started to turn up as the stock started to breakout of the range. Since the ADX was coming off such low levels it meant the ADX reading had a lot of room to move up as the SPY moved up and indicated it could trend up could be strong and last.

The Google chart below I wanted to use to show you when a stock has momentum and a strong uptrend that the ADX readings can have. First of all, look at how low the ADX reading was in July 2012 indicating that any move higher would be shown in an increasing ADX as the readings were so low.

Take notice of the ADX indicator flattening out in August as the stock continued to move higher, showing that ADX is a poor timing indicator. It is useful though to noticing that the ADX readings are getting high and to watch for a slowdown in the trend when ADX are elevated at those levels. 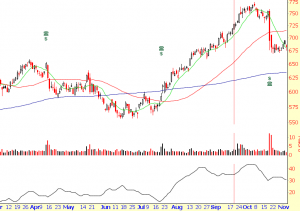